Arrival of 2.5 lakh Dawoodi Bohras in Surat… a boon to the city!! 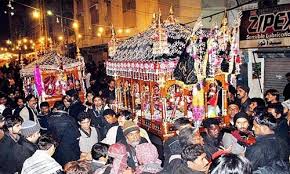 Deities at Muharram in Surat

Muharram is the fourth month of the islamic calendar. It is considered to be the most sacred months of the year, excluding Ramadan. The rituals are followed by the Dawoodi Bohras for 9 days. Some Bohras fast during these days. A number of charitable acts and deeds are performed during this period. A holy sermon is delivered by their leader takes which takes place from 10 am to 7 pm. All the Bohras then fall out on the streets of the city to devour the typical Gujarati dishes and non-vegetarian cuisines being offered at the restaurants after their evening prayers and lectures. This has augmented the business of restaurant holders in the city to an echelon they had never imagined of. 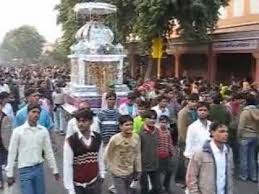 Dawoodi Bohra community sources said Syedna Muffadal Saifuddin sahib arrived in the city on October 19. The nine day long devoted sermon on the occasion of Muharram began on Saturday and will continue till November 4. Streets of Surat city are eventful even at nights because the Bohras meet priests and listen to the religious sermon all night long. Various processions start on the seventh day and they continue till the last day of Muharram.

South Gujarat Hotels and Restaurant Association (SHARA) vice-president Sanat Relia says, “It is a glittering Diwali for us. All the hotel rooms in the city were pre-booked 15 days ahead of the Diwali festival, mostly by Dawoodi Bohras from across the country and abroad. There are over 2,400 rooms in the city’s hospitality industry.

It has been an implausible Diwali for the people of Surat with gifted Diwali bonus by the Dawoodi Bohras. The outcomes of religious sermon have nevertheless worked for the residents of Surat. Expectations on Diwali 2015 have risen to a tremendously higher altitude.

Previous: Surat based Diamond Companies to Start an Airline Service
Next: Postmodernism of Surat leads to the development of first elevated swimming pool in Gujarat