This story is the biggest story of  Diwali bonus 2014 that any employee might have ever received. Savji Dholakia amazed his artisans and engineers with an extravagant Diwali bonus 2014 for fulfilling his dreams of reaching the summit of diamond industry. All the employees waited in their hundreds with bated breadth in a maundering lawn awaiting for the ‘celestial’ announcement from their generous diamond king. The time had now come to become proud owners of cars, a home and diamond jewellery. The crunch of Diamond industry in India was off-the-cuff this year in the history of diamond business, indirectly dampening the spirits of millions of employees. But it is going to be a scintillating festival of lights for nearly 1200 employees of Harikrishna Exports, the 6,000-crore diamond firm from Surat, to hit a bull’s eye. The company’s chairman, Mr. Dholakia, asked his employees to choose from cars, flats and jewellery for their sweat-dripping effort in achieving yearly targets.

Thousands of employees waiting eagerly to be rewarded by their generous king of diamond industry.

The employees who qualified in what the company calls ‘loyalty programme’ excelled well enough to be gifted a massive performance incentive. Around 500 employees cherry-picked a brand new Fiat Punto cars, 570 opted for jewellery and around 207 chose a flat.  The employees have earned a living out of their immense hard work. These employees are now the envy of every working professional in India.

“All my dreams have come true only through my workers. A target was set for the artisans and engineers and they have achieved it. This is a big day for the entire Harikrishna family. We are the first company in the world to offer performance incentive valued at around Rs. 3.60 lakh to each of the 1,200 diamond workers. We don’t look at it as an incentive or bonus, but we call it a loyalty programme, under which we recognize our employees who have contributed great value to the growth of the company by constantly upgrading their skills over these years”, said Mr. Dholakia. According to him, the company showered his workers with Rs. 50 crore worth of incentive this year. The company had started this loyalty programme in 2011. In the first year, three artisans were gifted cars. Last year, around 72 artisans were given cars for achieving annual targets. 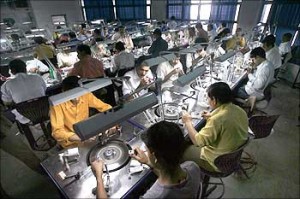 Jignesh Makwana, a diamond artisan and a proud owner of the car in the company said, “I received a car as gift last year. So this year when I qualified in the incentive scheme, I opted for a flat. I will pay Rs. 3.60 lakh as down payment in the housing scheme of the company to own a 3BHK flat.”  Another employee, Mehul Asalaliya, an engineer  said, “I opted for jewellery as I have a car and a house. This Diwali, I will gift the jewellery to my beloved wife.” Well, this indeed is a dream come true for the employees. How I wish the same from every chairman of diamond  company in India!!

Let me introduce you to Savji kaka, as he is dotingly known in the diamond circles, is a native of Dudhala village in Amreli district. He came to Surat in the late 70s in search of a job. He went to his uncle penniless to borrow some money to start off the diamond business on a basic level. After years of hard work and dedication, he established Harikrishna Exports in 1992. As the years passed by, his company grew bigger and bigger with a massive increase in his employees. In just two decades, the company hit a target turnover of Rs. 6,000 crore per annum with the total strength of workers and employees rising to over 9000 including Surat, Mumbai and overseas.

Mr. Dholakia is gratified with the extent of hard work his employees are putting in. He says, “The average monthly earning of each of my artisan and engineer is Rs. 1 lakh. There is one diamond artisan, who earns Rs. 3.49 lakh per month. Artisans are the backbone of our industry and we have set an example by giving our employees highest wages in the industry.” 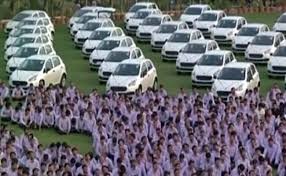 He is of the conviction that it is the dedication of his workers that he has reached a pinnacle in diamond industry and wants to reward his people with jaw-dropping rewards. These artisans have given him a living and he now wants to give them a living in return. This was perhaps the most generous Diwali gift event anywhere in India in recent history.

!200 employees to be given a massive Diwali bonus achieve yearly targets to get a massive incentive Harikrishna Exports from Surat Rs. 50 crore worth of incentive Savji Dholakia Surat Diamond merchant rewards 2014-10-21
Aanchal Madan

Tagged with: !200 employees to be given a massive Diwali bonus achieve yearly targets to get a massive incentive Harikrishna Exports from Surat Rs. 50 crore worth of incentive Savji Dholakia Surat Diamond merchant rewards

Previous: Top 5 lounges in Surat
Next: Lets battle it out at Warzone: Play Warzone Paintball in Surat