Mahesh Savani: A Surat based businessman conducts a mass wedding event for 111 daughters. 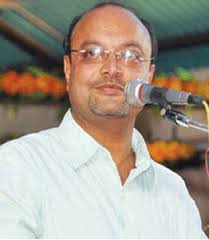 Mahesh Savani giving out a speech at the mass wedding event

A benevolent businessman, Mahesh Savani, from Surat conducted a mass wedding event entitled ‘Lagana Nu Vavetar’ on Sunday, 30th November. The extravagant affair was the wedding of 111 fatherless daughters, where Savani financed Rs. 60 million for a three-day ceremony. Wedding was on an open plot of a school compound of 150,000 square-metre area in Abrama region of Surat. 70,000 guests were invited, including the first woman Chief Minister of Surat, Anandiben Patel.

Mahesh Savani, owner of P P Savani group in Surat, is a businessman with interests in real estate and diamonds. He also runs five schools and a multi-speciality hospital. When asked about his generosity for conducting such a massive event and being a father-figure to 111 daughters, Savani says “I learned about a few daughters without a father who are trying to get married and realized how difficult it is to get a father-less daughter married. I felt miserable looking at their condition. So I wanted to be a father to all these daughters and conduct a mass wedding event for them. This is my way of offering help to these girls. It is a blissful feeling for a father to get his daughter married and have the privilege to do her kanyadaan.” He completed all the rituals of the wedding for the brides and also offered gifts worth Rs. 4.5 lakh for each of ‘111 daughters’ for them to begin a new life with their husband. The gifts included gold-silver sets, vessels, furniture and other domestic items.

The brides present at the mass wedding were girls of all castes, out of which three were Muslims and were married as per Islamic rituals. The wedding saw chanting of vedic slokas on one side and quaranic versus on the other. The family members of bride and groom were present in a small pandal, organized for each of them on the huge ground. Blessings were offered to the brides by religious leaders like Sadhavi Rutumbara, political leaders and community people. Sources say that Anandiben Patel could not attend the function at the last moment because of her ill-health but her message was conveyed to all the couples and blessings were offered too. Her message also included appreciation for Savani for his honourable deed in getting the girls married. 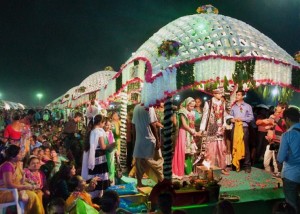 Mitali Narola, who lost her father in 2009, got married to Rohit Dholakia at the same event. She said “Mr. Savani is a father-figure to me and to all my brothers and sisters. I sincerely thank God for sending an angel like him in my life.” Naheda Banu, who lost her father when she was a small child, got married to Arif. She said “When we met Mr. Savani, he came across as a fatherly figure. He will always be in our prayers and may Allah bless him for his respectable deeds.”

A representative of the Guinness Book of World Records, named Eva, was present at the stage during the event. Eva gave a certificate of world record to Savani, for mehendi (heena tattoo) to be applied on 521 girls at the wedding. There was an opportunity for the volunteers at the wedding, which was, at least 1000 volunteers will attempt to get into Guinness Book of World records by maintaining cleanliness for all the three days at the venue and best of the volunteers will be honoured with attractive prizes.

This mass wedding event was appreciated by the political leaders in their speech for a noble cause. The wedding benefited not only the daughters but also the volunteers who worked hard for the extra ordinary rewards. To end the event, Savani said “I thank all the family members of the wedding couple, religious leaders and political leaders to attend the ceremony and to shower your blessings on them. We had started organizing such ceremonies from 2007 by getting two girls married and now we have reached a level where we got 111 girls married. With your blessings, We will continue organizing such events in the forthcoming years.” 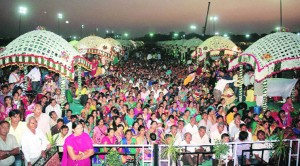 It seems like our city is blossoming with such princely men to serve the society with their kind-heartedness. We salute our men for their righteous deeds and thank God for their existence!!