PAGE3
Home / Events / Viral Desai: An entrepreneur with a heart of gold

A  young and dynamic 36 years old industrialist Viral Sudhir Desai has made Surat feel proud of him.Viral Desia was born and bought up in Surat. He completed his schooling from  ST.XAVIERS  school in Surat. After that he did his college from SPB college of Surat. This Surat based entrepreneur holds a masters degree in Economics and Business management.Viral Desai, the CEO of  Zenitex private limited company. Zenitex company is a Surat based textile process and dyeing company. Mr.Viral firmly believes “the business which aims for earning more and more profit, then indeed that type of business is considered to be a poor business”. Zenitex company has been taking exemplary measures in energy conservation and environmental protection since a many years. 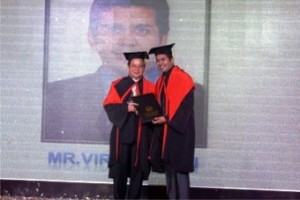 This textile industrialist Viral  Desai was conferred with honorary doctorate in Vietnam by the World Records University. This university is the only university that offers an honorary doctorate to record holders. A convocation ceremony was held for the same last month in Ho Chi Minh City of Vietnam.Such a honorary doctorate is usually presented to those individuals whose efforts or contribution have made a significant impact,on wider organisation along with the proficiency of having a world record. Desai was bestowed with this honorary doctorate for winning the most number of awards for environmental protection and energy conservation. Under the leadership of Viral Desai ,the Zenitex company has been in consistent with the “GREEN ENERGY” principle and even succeeded by winning an award for “best industry of Gujarat ” and” National Energy Conversation” awards from central government for three consecutive years. It is not for the first time that Mr. Desai has achieved an award. He has been awarded many a times for his dedication and hard work. He has also received an award for “the outstanding entrepreneur” in the year 2009-2011 from South Gujarat Chamber of Commerce. The award is unique in the sense that so far no other textile industrialist has ever bagged an award in this category.

Desai’s perseverance and his dedication towards fulfilling the “GO GREEN” mission and the sustainability initiatives has won him several awards and accolades.And for the same he even holds certification from the Limca books of records .Mr.Desai is credited with pioneering and setting benchmark in sustainable textile infrastructure development through innovation and incorporation.

Only five Indians were chosen for this prestigious convocation ceremony.And he was the only businessman from India to receive this huge honor. Record holders from other places like Cambodia,China and Laos were also present at this ceremony.During this prestigious ceremony eminent ministers of Vietnam graced the flamboyant ceremony and many other local cultural programmes were arranged for entertainment.

Prior to this many top personalities were honored with the doctorate degree.It includes personalities from Bollywood such as Shah Rukh Khan,Amitabh Bachchan for promoting art and culture.Apart from these super stars even renowned business personalities like Mukesh Ambani and Ratan Tata were honoured for their quest for innovation in corporate responsibilities in business.

The national media has tagged Mr.Desai as “THE GODFATHER” of young,dynamic entrepreneurs as he sets new record of getting the highest recognition and achievement for any industrialist at a very very young age.He has set a benchmark and recognition for India and Gujarat all over the world.

Previous: A Library no less than a treasure-Narmad Library.
Next: Surat inaugurates its first dealership of Harley-Davidson

Info Entrepreneurs Wish They Would Have Known Sooner http://proweb365.com/info-entrepreneurs-wish-they-would-have-known-sooner/